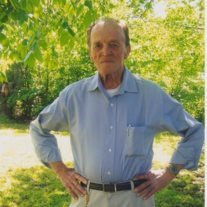 Grand Prairie - Wade Hampton Burgess, Jr. was born on November 19, 1928 in Bay City, Texas. He went to be with the Lord on February 10, 2014. Visitation will be Friday February 14th at 1:00 pm at Chambers Funeral Home in Cisco and the funeral service at 2:00 pm in the funeral home chapel. Burial will follow at the Oakwood Cemetery in Cisco. Wade was a very intelligent man, skipping four grades in school before going on to obtain a GED and enter the military. Wade was a jack of all trades, excelling in many areas of life. He entered the Army Air Corp at an early age before moving on to become a United States Marine. He was a Veteran, serving in Korea in 1951. Serving as a Marine was his greatest joy. During his time in the Marines, he met and married Jo Ann Burgess and together they had four children. After leaving military service, he attended Hardin-Simmons College in Abilene, Texas. He was very artistic and enjoyed working with his hands; building, painting, and drawing. Having a very nice singing voice, he was asked to sing at various places around town during his younger years. He was also a baker and cake decorator, making the wedding cakes for all of his children, as well as other family members. He had a love for cooking also. He loved to work crossword puzzles, watch westerns on TV and listen to the Lawrence Welk Show. Wade is preceded in death by his mother and father, Wade Hampton Burgess, Sr. and Flora Ann Burgess, as well as his sisters, Rosie Prince, Annie Garvin, and Dorothy Johnston, his brother, Sammy Burgess, and also his granddaughter, Chanda LaRue Prior. He is survived by his partner in life, Jo Ann Burgess, his children, Shelly Webb, Lon Carey Burgess, Belinda Nelson, and Connie Monsivais, 12 grandchildren, 17 great grandchildren, his sister, Charlotte LaRue Kincaid, and many nieces and nephews.

Grand Prairie - Wade Hampton Burgess, Jr. was born on November 19, 1928 in Bay City, Texas. He went to be with the Lord on February 10, 2014. Visitation will be Friday February 14th at 1:00 pm at Chambers Funeral Home in Cisco and the funeral... View Obituary & Service Information

The family of Wade Hampton Burgess JR created this Life Tributes page to make it easy to share your memories.

Send flowers to the Burgess family.