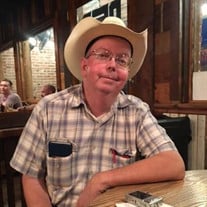 Tommy Lee Claborn, age 52, went home to be with the Lord and join his mother, Annette, on Tuesday, September 26, 2017. Services for Tommy will be at 1 pm Saturday, September 30, 2017 at the Cisco Church of Christ on I-20 West in Cisco. Visitation will be from 6-8 pm Thursday at the Chambers Funeral Home, 203 W 7th Street, in Cisco. Burial will be at the Elm Cemetery near Okra. Tommy was born November 1, 1964 in Cisco to Danny Lee and Annette Marie Brawley Claborn. Tommy was a graduate of Cisco High School and a graduate of Tarleton State University. After graduating from Tarleton, Tommy returned to Cisco and began teaching Ag. at Cisco High School. He loved all things agriculture, including teaching and especially his students. Due to life changing events in 2001, Tommy became unable to continue teaching but after some time he was able to pursue his next love and that was ranching. Tommy continued to stay active in the Cisco FFA by helping with the kids and their youth projects. Tommy is preceded in death by his precious mother, Annette. He is survived by his father, Danny Lee Claborn of Cisco and sisters: Pam Shine and husband Richard of Oak Point, TX, and Leisha Powelson and husband Ronny of Duncan, OK. He is also survived by three nieces, Kimberly Powelson Cantu, Danette Elizabeth Shine and Cortney Powelson Kubala and husband Ryan and one great-niece, Rylie Grace Kubala. Tommy loved his family and friends dearly but had a special place in his heart for his nieces. The family asks that donations be made in Tommy’s memory to the Cisco FFA Chapter, 1300 Pershing St, Cisco, TX 76437, or to Elm Cemetery, PO Box 404, Rising Star, TX 76471. Johnny McCaghren will officiate with Judge John Bailey speaking on behalf of the family. Shawn Johnson will give the eulogy, and Donja Carey will sing. Pallbearers will be Joe Clack, Scott Douglas, Robert Gorr, Robert McCullough, Wade Shackleford, and Glenn Starr. On-line condolences can be made at www.chambersfh.net

Tommy Lee Claborn, age 52, went home to be with the Lord and join his mother, Annette, on Tuesday, September 26, 2017. Services for Tommy will be at 1 pm Saturday, September 30, 2017 at the Cisco Church of Christ on I-20 West in Cisco. Visitation... View Obituary & Service Information

The family of Tommy Lee Claborn created this Life Tributes page to make it easy to share your memories.

Send flowers to the Claborn family.