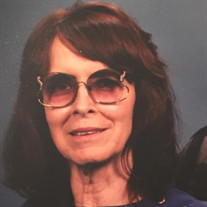 Sarah Tucker passed away peacefully November 23rd at 4:00 pm at the Nolan Nursing home and rehabilitation Center in Sweetwater, TX. She is survived by Stan of Sweetwater and Lee of Houston. Her faithful husband Joe and beloved son Audrey had previously passed away. Grandchildren include, Cory, Erin, Andy, Rusty, Chris and Austin. Sarah was born in Carbon, TX April 2 1934, daughter of George and Mattie Snodgrass of Carbon, TX. After Mattie passed away, Sarah’s big sister Daphene helped raise Sarah and her brothers, Bill and Jimmy. Burl, her other brother, died of a childhood illness. While working as a telephone operator, Sarah met Joe and a few months later they were engaged to be married on March 3rd, 1949. They moved about south Texas following the oil field work and settled back in Cisco. Sarah was very industrious and energetic in everything she did from cleaning house raising a garden, working at a sewing factory, raising bulldogs, and helping Joe with his work. At 55 years of age, Sarah was diagnosed with multiple sclerosis. Her health slowly deteriorated over the next 24 years from cane, to walker, to wheel chair and to the bed with little use of only one hand. Joe faithfully took care of her until his unexpected death. Family and lifelong friends such as Shirley Tucker, Christine Reich and Louanne, Kerstin, and others faithfully dropped in to check on her when she was shut in and will always be remembered and appreciated. She outlived everyone’s expectations. For those who knew her over her lifetime physical strength diminished her faith in God her Savior Jesus Christ grew. Rest in the arms of Jesus dear Sarah until we meet again. Services will be held at the Pleasant Hill Baptist Church at 10:00 am Monday morning November 28th.

Sarah Tucker passed away peacefully November 23rd at 4:00 pm at the Nolan Nursing home and rehabilitation Center in Sweetwater, TX. She is survived by Stan of Sweetwater and Lee of Houston. Her faithful husband Joe and beloved son Audrey had... View Obituary & Service Information

The family of Sara J. Tucker created this Life Tributes page to make it easy to share your memories.

Send flowers to the Tucker family.