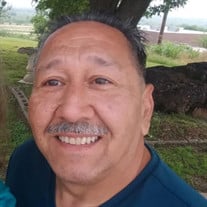 Ray Alan Franco, 65, on Saturday, September 5, 2021, slipped the surly bonds of earth to meet his Lord and Savior, Jesus Christ, in heaven after fighting a wretched disease for over 30 days. Ray was born on June 30, 1956, in Dallas, TX, where he grew up, went to school, started his career, raised a family, and later in life accepted Jesus Christ and became a man of God who believed and saw miracles happen, who heard from God and spoke life to many. He was a great communicator, loved to try new things and spend quality time with his family. He worked in construction, sold used cars at Park Cities Ford, started his own residential remodeling business, then joined his father and brothers in remodeling his father’s commercial and residential properties. After “retiring” from remodeling, Ray pursued his passion for helping veterans. He joined the Patriot Guard in 2014. At a motorcycle event, he learned that he was young enough to join the Texas State Guard! He joined and served for one year. He discovered that the discipline of Texas State Guard life was not for him and turned his attention to recruiting young men, including his nephew, Kevin Wolfe; a marine veteran; and a young man in need of a father. His next adventure was in private security, where he earned his Level 4 Private Security certification. He provided private security for Jewish synagogues, dialysis centers, and private events. He “retired” again in 2021 to become a rancher. He went “all in” with western shirts, work boots, cowboy hats, cowboy belts, and cowboy boots. Ray was a loving father of three children who he raised to love and have a special relationship with God. He taught them to lean on God during trying times and to rejoice in him for all the many blessings life gave to them. Ray was a loving grandfather and was a true kid at heart when it came to having a great time with his grandchildren. Ray met the love of his life, Laura Anne Stanley Franco, at the last meeting of a co-ed Bible Study. Their next encounter was a few weeks later at a Mexican restaurant followed by trips to Home Depot and Lowes to look for plumbing parts due to weeklong freeze in Dallas that froze pipes going to a water softener in Laura’s garage and froze pipes in rental properties that Ray maintained with his brothers. Ray and Laura learned they shared a love of riding bicycles which led to many training rides and group rides in the N. Texas area and riding 100 miles in the hottest “Hotter Than Hell” bike ride in Wichita Falls, Texas on Aug 2012. They married on March 31, 2012, and enjoyed nine and a half adventurous years together, falling far short of the 30 years that his wife envisioned. Ray and Laura moved to their retirement dream home with 14 acres of forest, fields, small creek, and lots of wildlife which they enjoyed every moment together for the past 5 months. He is survived by the love of his life, Laura; brother Edward Franco; sister Tina Franco and husband Hyattye Simmons; brother Raymond Ortiz; his 1st wife Janie Franco; eldest daughter Micha Franco Gomez and wife Dora Gomez; son, Micah Franco and wife Maria; baby girl, Hannah Franco and husband Alex Galvan; 4 grandchildren: Christopher and Zachary Galvan, Mikaela Gomez, Landon Franco; aunts, uncles, cousins; and many dear friends who loved him and all of whom will miss him greatly. He is preceded in death by his father, Ramon Franco; his mother, Rachel Olivas; granddaughter Lindze Galvan; aunts, uncles, cousins, nephew; all of whom are now celebrating with Ray in heaven. A green burial was held at the family cemetery on their 14-acre homestead on Saturday, September 11, 2021, where 40 family members and close friends mourned the passing of Ray and celebrated his great legacy of passion for God, connection with people from all walks of life, and prayer from his heart for all his family and friends. Serving as pall bearers were Andre Myers, Alex Galvan, Edward Franco, Greg Maldonado, Micah Franco, Raymond Roscoe, and Raymond Ortiz. The Patriot Guard stood a flag line, played taps, folded and presented an American flag to his wife. Texas State Guard chaplain Kim officiated with an inspiring message and prayer. Friends and family shared a BBQ lunch afterwards. A memorial service will be held 1-2:30 PM on Saturday, September 18, 2021. It will be held at the Covenant Church chapel located at 2644 Trinity Mills Rd, Carrollton, Texas. You are welcome to send a live plant or flowers to the chapel or to 4430 FM 569, Cisco, TX 76437. Alternatively, you may support Ray’s passion by donating to either Samaritan’s Purse “Operation Heal Our Patriots” (https://www.samaritanspurse.org/article/alaska-fridays-are-a-celebration/) OR 4 Paws 4 Patriots (https://4paws4patriots.org/). Samaritan’s Purse gives wounded veterans and their spouses the opportunity for spiritual refreshment, physical renewal and marriage enrichment for a week in Alaska. 4 Paws 4 Patriots trains a disabled veteran and an untrained dog together to become a service dog team.

Ray Alan Franco, 65, on Saturday, September 5, 2021, slipped the surly bonds of earth to meet his Lord and Savior, Jesus Christ, in heaven after fighting a wretched disease for over 30 days. Ray was born on June 30, 1956, in Dallas, TX, where... View Obituary & Service Information

The family of Ray Alan Franco created this Life Tributes page to make it easy to share your memories.

Send flowers to the Franco family.