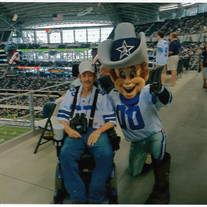 CISCO – Randy Neil Kinard, 56 years old, of Cisco passed away Wednesday, October 15, 2014 in Ft. Worth, TX. A graveside service for Randy will be held at 2:00pm Saturday, October 18 at the Pleasant Hill Cemetery. Randy will lie in state at Chambers Funeral Home in Cisco, TX. Randy was born November 22, 1957 in Lubbock, TX to Lee Edwin and Carlita Rogers Kinard. He graduated from High School in Carnegie, OK and moved to Cisco in 1976. After moving to Cisco he met and married Pam Cockrell on December 18, 1982. Randy worked for Reynolds Inc. in Cisco for 20 years before retiring. Randy loved football and looked forward to football season every year to watch the Dallas Cowboys and the Cisco Loboes. He also loved to fish and was a collector of trains. Randy was a Baptist. God gave Randy crosses to bear that challenged every step he took during the 56 years of his life and he prevailed in a way that many never could. He carried the burden of dyslexia and an inherited condition known as myotonic dystrophy that stole his body. But Randy was gifted in the virtues that drive the good in our human spirit. He loved people who did not love him, even those who mocked and attacked him for what he wasn’t. Randy faced life with great courage and hope, he was not bitter a single day in his life over the unfairness of the cards he had been dealt. He fought for what was right, he was a man of honor. He smiled, he laughed, he surrendered himself to the needs of others and he showed all these things from the day he was born. Randy suffered patiently and endured. Randy is preceded in death by his parents and one sister Karla Kinard. He is survived by his loving wife Pam Kinard of Cisco, one daughter, Kristi Davis of Abilene and one Grandson Brandon Davis also of Abilene. Randy’s greatest source of pride came from his family, his daughter, Kristi and grandson Brandon. He was very proud of both of them and often committed on how proud he was of Brandon and his academic achievements. Randy is also survived by one brother Rod Kinard and his wife Lynn of Duncanville and their children Travis and his wife Theresa, Katy, Clint and his wife Katie, Hannah and Amie and seven great nieces and nephews. He is also survived by his best friend since High School James Whitley of Stephenville. Randy’s brother Rod said, “Whenever I reach those points in life where I truly want to give up, I simply think of Randy and say to myself ‘I SHALL NOT!’. I wish you had known him too. In lieu of flowers donations may be made in Randy’s name to MDA or the charity of your choice.

CISCO &#8211; Randy Neil Kinard, 56 years old, of Cisco passed away Wednesday, October 15, 2014 in Ft. Worth, TX. A graveside service for Randy will be held at 2:00pm Saturday, October 18 at the Pleasant Hill Cemetery. Randy will lie in state... View Obituary & Service Information

The family of Mr. Randy Neil Kinard created this Life Tributes page to make it easy to share your memories.

Send flowers to the Kinard family.