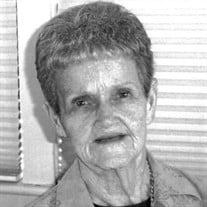 CISCO – Patsy Ann (Pat) Dill, age 88, went home to Heaven Sunday, July 21, 2019. Graveside services for Pat will be at 10 am Thursday, July 25 at the Albany Cemetery in Albany, TX. Family and friends will gather on Wednesday, July 24, from 5 – 7 pm at the Chambers Funeral Home, 203 W 7th, Cisco, TX. Pat Dill was born December 14, 1930 in Cisco, TX to Herman and Grace Mitchell Anderson. Pat was a life-long resident of Cisco and was a graduate of Cisco High School. September 8, 1951 she married Clarence Dill in Cisco and was by his side until his death in 1995. Pat worked as a Switchboard Operator for Southwestern Bell for 20 years, then went to work at Cisco Jr. College as the Telephone Operator and worked there for another 30 years until her retirement in 2005. Pat’s 2 greatest passions were her family and her job. She is survived by her children; son, David Dill and daughter Cynthia Dill both of Cisco, grandson; Cody Javarone and wife Kim of Weatherford, and 2 great-grandson; Grayson and Cooper. Pat is also survived by a sister, Billye June Johnson of Cisco, sister-in-law, Diane Dill of Conroe, TX, nephews; Mike Johnson and wife Lynn, and Durwin Dill and wife Helen, and several great nieces and nephews. Pat is preceded in death by her loving husband Clarence, her parents and a sister, Grace Ivaline Fussell.

The family of Patsy Pat Dill created this Life Tributes page to make it easy to share your memories.

Send flowers to the Dill family.