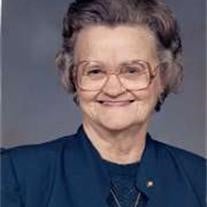 Olga Fay Parker, 98, of Weatherford, formerly of Cisco passed away February 21, 2013 in Weatherford. Services will be held at 11:00 am Saturday, February 23, 2013 at Cisco First United Methodist Church with Jim Wright officiating. Burial will follow at the Oakwood Cemetery. The family will receive friends from 6-8 pm on Friday, February 22, 2013 at Chambers Funeral Home of Cisco. Olga was born in DeLeon, Texas on December 16, 1914 to Elisha Ford and Mary Ann (Nabors) Ford. She graduated from Texas Tech University with a Master's degree in teaching. Olga taught school at Cisco ISD and Cisco Junior College. She saw many students pass through her classroom door and she loved each and every one of them dearly. She was a member of the Disciples of Christ, Delta Kappa Gamma and the Retired Teacher's Association. Olga married Charles E. Parker on December 19, 1959. He preceded Olga in death in 1966. Olga is survived by a son, Robert Parker and his wife Catherine of Aledo, Texas; a grandson, Jeff Parker and his wife Amber and great-grandson, Jayden Parker of La Vernia, Texas; and many nieces, nephews and great nieces, and great nephews. Preceding her in death were both of her parents: her sisters, Nona Stevens , Azle Henderson, Norine Gulies, Della McCarroll, Tommie Cabaness, Julia Belle Ford and Grace Hawkins; and her brothers, Ed Ford and Thurman Ford.

The family of Olga Parker created this Life Tributes page to make it easy to share your memories.

Send flowers to the Parker family.