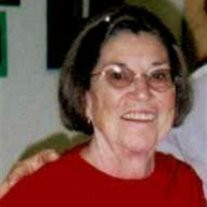 Nanette West Maxwell Cisco Nanette W. Maxwell, 78, of Cisco passed away peacefully, December 6, 2012, at her home with her family. A memorial service will be held at 2:30 pm Monday, December 10, 2012, at Chambers Funeral Home, 203 West 7th, Cisco, and the family will receive friends from 5-7 pm at the funeral home. Nanette, also known loving by family as "Foozie", was born in Cisco, Texas on March 23, 1934 to Arthur C. West and Johnnie Belle "Winston" West. She graduated from Cisco High School in 1952, she may have left Cisco but she took the "Lobo pride" with her on her life journeys until she returned to Cisco in 1979 and stayed until her passing. She graduated from Texas Christian University in 1956 with a BBA in Journalism, then later in life she discovered her love of teaching and returned to school to earn a BBS in Elementary Education in 1976. There began one of the greatest loves of her life, teaching children. Nanette taught school in Morton, Texas from 1976-1979, then she began her career with Cisco Elementary until her retirement in 2004. She saw many children pass through her classroom door and she loved each and every one of them dearly. Nanette is survived by a daughter, Teresa Slaughter and her husband, Jay of Cisco, Texas; a brother, Arthur (Sonny) West and wife and longtime sister, Deloris (Bo) of Centerville, TX; grandchildren, Zachary Maxwell of Waco, TX, Nathan Maxwell Slaughter of Cisco, TX, Darren Slaughter of Cisco, TX, Justin Slaughter of Cisco, TX, Cody Slaughter and Ariel Rabb of San Angelo, TX, Wendi Frasier and husband Justin of Cisco, TX; great-grandchildren, Jaylan Frasier, James (Budro) Frasier, Jackson Slaughter and Paxton Slaughter; nephews, Gary West and wife Michalina West of Austin, TX and Dan West of Centerville, TX; and several great nieces and nephews. Preceding her in death was both of her parents, her brother, Bernie Don West and a nephew, Mike West. The family would like to extend heartfelt appreciation to Lighthouse Hospice, Jeannie Plowman, Amanda Evans for loving Nanette and making her last time on this earth memorable and happy. Memorials may be made to Cisco Elementary Library, in memory of her love of reading, 1100 Avenue H, Cisco, TX 76437

The family of Nanette Maxwell created this Life Tributes page to make it easy to share your memories.

Send flowers to the Maxwell family.