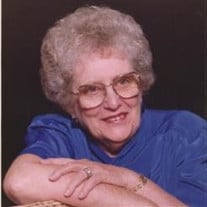 Mildred Geist, age 92, went home to be with her Lord and Savior, April 4, 2017. Graveside services will be at 1pm Monday, April 10, 2017 at the Scranton Community Cemetery under the direction of Chambers Funeral Home in Cisco. Visitation will be Sunday afternoon from 1-5pm, April 9th at the funeral home at 203 W 7th Street, Cisco, TX. Mildred Elizabeth Boland Geist was born August 2, 1924, to Oscar Lee and Lena S (Ray) Boland. Mildred was the fifth of eight children: brothers Roy, John, James, William, and Dale, and sisters Mispah and Melba. She was born at home and resided in Scranton, Texas, until graduating from Scranton High School. During WW II she was recruited by Boeing Aircraft as a “Rosie the Riveter” to work in the airframe assembly plant in Seattle, WA, where she was hand selected for a team to repair Gen. MacArthur’s plane. She met husband Nelson on the way to Seattle and they married on October 9, 1943. Their union resulted in much relocation due to Nelson’s Air Force career. Their travels included Texas, Libya, North Africa, Washington State, & California. Wherever they were assigned, Mildred was both homemaker and worked as a secretary and bookkeeper for private firms and the Air Force Exchange System (BX). In 1979 they retired to Scranton, Texas, where they had a truck farm, and Mildred enjoyed crafting quilts and afghans for family and friends, while assisting in the care of her elderly mother. Mildred was a member of First Baptist Church, Fairfield, CA, & First Baptist Church, Cisco, TX. She was taught music/piano by her mother, and sang in the choir and as a soloist starting as a young child until 2004. Mildred had three children: Patricia (Geist) Dodini, John Nelson, & Paula Elaine (deceased); Grandchildren: Phillip Dodini (deceased), David Dodini, John Lee Geist (deceased) & Christine (Geist) Hudson. There are seven great-grandchildren: Christina DodiniMarques Horton, Chrystial (DodiniMarquez) Cuellar, Steven, Gregory & Victoria Jimenez, Kaila & Lily Hudson. There are six great-great-grandchildren: Jaymison & Allyson Cuellar, April Horton, Trinity & Kiley Jimenez, & Savannah Jimenez. Memorials may be made to organizations for research of Alzheimer’s disease.

Mildred Geist, age 92, went home to be with her Lord and Savior, April 4, 2017. Graveside services will be at 1pm Monday, April 10, 2017 at the Scranton Community Cemetery under the direction of Chambers Funeral Home in Cisco. Visitation will... View Obituary & Service Information

The family of Mildred Elizabeth Geist created this Life Tributes page to make it easy to share your memories.

Mildred Geist, age 92, went home to be with her Lord and Savior,...

Send flowers to the Geist family.