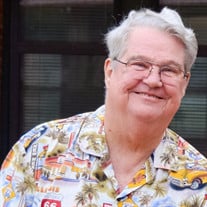 Michael Duane Hitt, 73; Went Home to his Heavenly Father on March 31, 2022 in Abilene. A Memorial Service will be held 11 a.m. Thursday, April 7th at First Christian Church in Cisco. A celebration of life will be held at a later date in his beloved Tyler. Michael was born on July 10, 1948 at Tyler TX to Frank & Belle Horton Hitt. He graduated from John Tyler High School in 1968. He received his Associate Degree in Applied Engineering and Drafting from Tyler Jr. College in 1972. Michael loved teaching, He taught computer science and programming at Tyler Jr. College, while he was working at TJC he started studying for his Bachelors of Science degree at Texas Eastern University (now U.T. Tyler) graduating in 1977. He received his Master of Science Degree from Texas A&M Commerce in 1979. Michael worked for National Homes as a draftsman, owned a copy business in Commerce, created plans and gave lectures on Earth Shelter Homes. He worked for Tyler Junior College, Texas Tech, McMurray and Cisco College. Michael met the love of his life at the age of 62 having been a bachelor until then, he always said he waited for the best. He married Yvonne McFadin on November 20, 2010 at Cisco TX. They lived in Abilene where he continued teaching at the Abilene Campus of Cisco College. He retired from full time teaching in 2012 but his love of teaching was too strong so he then started his carrier as an adjunct teacher for Cisco College until ill health forced him to fully retire in 2019. Michael touched many many lives with His love and kindness. The love and forgiveness he found in Christ Jesus he wanted to share with others and he did that in so many ways. His love was often given in a quiet gentle way and sometimes if you didn’t slow down and get to know him you would miss it. This love could be seen through the time, love, prayers, money, energy, patience, and laughter that he gave daily. It has been said that Michael’s life was a true example of The Fruits of the Spirit; Galatians 5:22-25. Michael was preceded in death by his parents, 2 sisters, Mary Hill and husband Don and Pat King and husband Billie Ray. He is survived by his wife Yvonne, stepson Steven McFadin and wife Natalie of Fresno CA. Step daughter Brenda McFadin of San Angelo, Brother Glynne Hitt and wife Betty of Lindale TX, 1 granddaughter Stephanie McFadin of Fresno, CA. Michael will be missed by his extended family: John, Pam and Zoe Rakes, Westley Rakes, Katie Ash, Elizabeth Boykin and Tina Rakes.

Michael Duane Hitt, 73; Went Home to his Heavenly Father on March 31, 2022 in Abilene. A Memorial Service will be held 11 a.m. Thursday, April 7th at First Christian Church in Cisco. A celebration of life will be held at a later date in his... View Obituary & Service Information

The family of Michael Duane Hitt created this Life Tributes page to make it easy to share your memories.

Send flowers to the Hitt family.