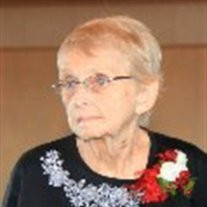 Mary Ann Handrick Ziehr went to be with the Lord on December 14, 2013. Services were held at 10:30 am Monday, December 16, 2013 at Redeemer Lutheran Church with Pastor Eric Stinnettee officiating. Burial followed at Redeemer Lutheran Cemetery. Visitation was held on Sunday, December 15, 2013 from 5:00 pm to 7:00 pm at Chambers Funeral Home in Cisco. She was born in Albany, Texas to Robert Adolph and Lillie (Quade) Handrick on September 11, 1934. She graduated from Albany High School, ranger Junior College, and attended Concordia Teachers College in Seward, Nebraska. Her first teaching position was St. Paul Lutheran School in Wilson, Texas; and she proceeded to teach at St. Paul Lutheran School in Harlingen, Texas; and Messiah Lutheran School in San Antonio, Texas. Mary Ann married Carl Arthur Ziehr on June 29, 1963. She moved to their farm south of Cisco, Texas where she was a homemaker for over 50 years. She was a member of Redeemer Lutheran Church in Cisco, Texas. Mary Ann Ziehr was preceded in death by her parents and husband Carl Ziehr. She is survived by her three children: her son Karl of Cisco, TX; and two daughters Nancy Stewart and husband Joe of Eastland, TX; Carol Griffin and husband Robin of Mansfield, TX. She is also survived by 7 grandchildren and 3 great grandchildren:Joshua Ziehr of Lubbock, TX; Nicole Ziehr McMillian and husband Brett of Fort worth, TX and their two daughters Makenna and Kinsley; Courtney Stewart of Stephenville, TX; Chad Stewart and wife Susan of Houston, TX; Ryan Griffin and wife Audra and son Aiden of Cashion, OK; Adam Griffin and Robin Griffin Jr. of Mansfield, TX. Mary Ann was a loving wife, mother and grandmother and will be deeply missed by her family and friends.

The family of Mary Ann Ziehr created this Life Tributes page to make it easy to share your memories.

Mary Ann Handrick Ziehr went to be with the Lord on December...

Send flowers to the Ziehr family.