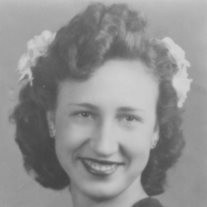 Baird – Lucy Debra Curtis, 86, passed away on Tuesday, January 28, 2014. Graveside Services will be held Wednesday, February 5, 2014 at 2:00 pm at Belle Plaine Cemetery, under the direction of Chambers Funeral Home in Cisco, officiated by Maxey Evans and Cynthia Tollett. Visitation is Tuesday afternoon from 5:00pm to 8:00 pm at Chambers Funeral Home. Lucy was born on August 26, 1927 at the Old Wheeler Ranch North East of Admiral, Texas in Callahan County to June E. and Lena (Kanady) Bibb. She attended and went to Bayou School, south of Baird, Texas, where she played basketball and sports. After graduation, she attended business school in Fort Worth, Texas. Upon moving back to Baird, she married Clifford W. Curtis in August of 1947. Together, they raised their son and daughter. She was a teller at First National Bank for many years. Afterward, she went to work at Gooch Packing Company in Abilene as a secretary and telephone operator. After retiring, she helped her son in their cattle operation. She was a member of the First United Methodist Church in Baird. Lucy lived almost all her life in Baird and Callahan County, Texas. Lucy loved life and had many great friends, who she admired and loved. She will be greatly missed by her family and friends. She is survived by her son: Guy C. and Sharon Curtis of Cisco, Texas; her daughter: Debra Whitehead and her husband Jack of Point, Texas ; her grandchildren: Ricky Agnew and wife Christy of Stephenville, Texas, Guy Samuel Curtis and wife Kate of Midlothian, Texas, and Lena Whitehead of Point, Texas;and her great grandchildren: Ashley and Addison Agnew and Cash Elliott Curtis.

The family of Lucy Debra Curtis created this Life Tributes page to make it easy to share your memories.

Send flowers to the Curtis family.