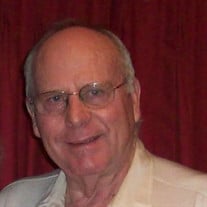 Jerry Morris Eckhart,78, passed from this life to the next on Tuesday, August 13, 2019 surrounded by his family at his home. His life will be celebrated with a funeral service on Saturday, August 17, 2019 at 10 AM at the Cisco First United Methodist Church with Dr. Genoa Goad and Duane Hale officiating. Interment will follow in Oakwood Cemetery. The family will receive friends at Chambers Funeral Home on Friday from 6-8 PM. Jerry Morris Eckhart was born on August 22, 1940 in Lawton, Oklahoma to Morris and Frances Woodward Eckhart. Indiahoma, Oklahoma is where he met Barbara Ann Curington, his high school sweetheart, and wife of 60 years. They were wed on March 2, 1959 in Wichita Falls. Mr. Eckhart was a Methodist and Southern Baptist, and proud veteran of the United States Army. Mr. Eckhart served as Chief Meteorologist at KTXS television station from 1984-1994. His weather career began in the United States Army in 1959. He joined the National Weather Service in 1967 where he worked for 17 years serving at National Weather Service offices in Lubbock, Fort Worth, Del Rio and Wichita Falls. Jerry was working in Wichita Falls on April 10, 1979 -- known as "Terrible Tuesday" -- when an F4 tornado hit the city, killing 42 people and causing $400 million in damage. Eckhart sent the tornado warning which was credited with saving countless lives, and for his efforts, he was awarded the U.S. Department of Commerce‘s Gold Medal. His survivors include his wife, Barbara Ann Curington Eckhart; sons, Timothy Morris Eckhart and Robert Jarold Eckhart; daughters, Kimberly Ann Rodriguez and husband, Joe and Wendy LaVonne Mace and husband, Charlie; brother, David Charles Eckhart and wife, Marina; sister, Frances J. England; grandchildren, Kristopher Mills, John Wantland, Jessica Eldridge, Heather Mace, Lauralee Mace, Felicia Dawn Garza, Ruthann Sells, and Derek Rodriguez and wife, Samantha, and 11 great-grandchildren also survive him. He was preceded in death by his parents and a sister, Cynthia Lee Trout. For those wishing to make a donation in memory of Jerry, the family suggests St. Jude Children’s Hospital, 262 Danny Thomas Place, Memphis, TN 38105, Water For Life, C/O Life Outreach International, P.O. Box 982000, Fort Worth, TX 76182-8000, or Orphan Kitten Rescue, PO Box 1201, Eastland, TX 76448. Online condolences can be made at www.chambersfh.net.

Jerry Morris Eckhart,78, passed from this life to the next on Tuesday, August 13, 2019 surrounded by his family at his home. His life will be celebrated with a funeral service on Saturday, August 17, 2019 at 10 AM at the Cisco First United Methodist... View Obituary & Service Information

The family of Jerry Morris Eckhart created this Life Tributes page to make it easy to share your memories.

Jerry Morris Eckhart,78, passed from this life to the next on...

Send flowers to the Eckhart family.