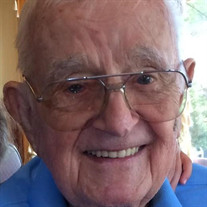 Cisco, Texas.   James Royal Weatherly Jr., passed away on July 31, 2017 , in Eastland, Texas, following a brief illness.    Jim was born, May 20, 1928, in Ventura, California, to Ruth Mildred Hoover Weatherly and J. Roy Weatherly. He was a resident of Ventura for 76 years, until moving to Cisco, Texas. Jim had the best sense of humor, and was often the life of the party.  He was a very caring friend, and always the first to check on his friends when they were in need.  Jim was an avid football fan, and never missed the Monday night fights !   He loved cars, old and new, and enjoyed attending car shows.  He loved his family, and was very proud of his son and daughter.  Jim attended school in Ventura, attended Mound Elementary School. He played football, and ran track for Ventura High School. He attended Arizona State, where he played football and was even Homecoming King !  Jim served in the United States Air Force.  In 1952, he married Ruth Marlene Weatherly.  Together, they had two children, Teri Lynn, and Todd Royal.  They were married 31 years, and remained  friends until his death.   He later married Nantha Pryor, and moved to Cisco.   Jim made his career in Ventura, where he started Weatherly Motor Company, with his father, Roy   Following his father’s death, he sold the business, in 1963,  but continued his passion as a car salesman.  Although he did all aspects of the car business, he could often be seen, on the lot, with his signature pipe !!  Jim is survived by his wife, Nantha.  He leaves behind his daughter, Teri Lynn Thompson ( Michael ), his son, Todd Royal Weatherly.   He is also survived by his 5 grandchildren, Taylor Jay Thompson (Victoria), Todd Michael Thompson, Tawni Marlene Thompson, Anna Marie Weatherly, and  Lori Lynn Murray ( Austin ).  He is also survived by his 5 great-grandchildren, Alyrie Rae, Molly Lynn, Brynlee Tawni, Bentz Taylor and Bowen.  He loved his family and was so proud of all of them. Jim is also survived by son-in-law, Ron (and Debbie Davis).  A special thank you to Ron and Debbie, who were there for him during his later years, and loved and cared for him daily.  They were extremely close, and Jim treasured his time and friendship with Ron and Debbie, looking forward to seeing them every morning. Besides being “in-laws”, they were great friends, and family.   Jim’s life was blessed by  his very best, life long friend, Don Bennett, who survives him.  They were/are  best friends, and ‘brothers’  since childhood. They shared a brotherhood bond, and Jim loved his forever friend, Don.  Jim was proceeded in death by his parents, an infant brother, Jackie, and numerous aunts and uncles.   A celebration of life will be held on SATURDAY, NOVEMBER 4, 2017  @  11:00 AM First United Methodist Church , Ventura, California  Internment, Ivy Lawn Cemetery, Ventura, California.   WE LOVE YOU DAD.  WE MISS YOU ALREADY. ​

Cisco, Texas.   James Royal Weatherly Jr., passed away on July 31, 2017 , in Eastland, Texas, following a brief illness.    Jim was born, May 20, 1928, in Ventura, California, to Ruth Mildred Hoover Weatherly and J. Roy Weatherly. He was a... View Obituary & Service Information

The family of James Royal Weatherly Jr. created this Life Tributes page to make it easy to share your memories.

Send flowers to the Weatherly family.