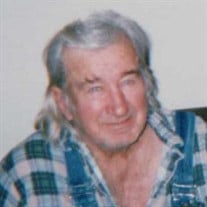 Frank W. Grabs, age 84, passed away Monday, July 7, 2014 in Ft. Worth. Graveside services will be held Friday, July11, 2014 at 2:00 pm at Oakwood Cemetery in Cisco. Visitation will be held on Friday, July11, 2014 from 10:00 am to 12:00pm at Chambers funeral home. Frank Grabs was born December 2, 1929 the seventh of eight children of Frank Grabs and Bertha Weise in the city of Beaukiss, Williamson County, Texas. He married Virginia Nell Menefee and they had three children, Frankie Teel and husband David; Susan Laughinghouse and husband J.R; and Frank Grabs Jr. and wife Lori. Grandchildren: Mandy, Jason, Jennifer, Windy, Melinda, Nell, Glenn. Great-Grandchildren: Megan, Peyton, Dillon, Cooper, Reese, Brady, Randy, Jaxon, Lincoln, Declan, Daine, Brooklyn and Garner. Great-Great Grandchildren: Jovie and Maverick Born in the farm life, he experienced a tragic loss at the age of 9 with the passing of his mother. Frank learned to drive a truck at a young age and worked delivering cream and milk products for Durland Menefee. Virginia Nell Menefee was one of Durland’s daughters and it didn't take long for their romance to blossom. Frank and Nell were married on April 9, 1950 in Cameron, Texas. They lived mostly in the central Texas area and for a short time in Lockhart, TX, in 1971. They then purchased about 30 acres in Comal County outside of New Braunfels, TX; where his children and grandchildren lived in the 80s and 90s. He worked hard on the road and then came home to drive a tractor. He farmed much of the acreage they owned. Frank's career in driving was very successful. As a long standing Teamster driver, he earned one million safe miles with 30 years of service to Roadway Express. He was very proud of his career as a truck driver. In fact, his son, Frank Grabs, Jr. and his grandson, Jason Emmele, followed in his footsteps in the transportation industry. Frank loved to fish. Summertimes were spent at his favorite fishing holes around Canyon Lake. He would invite grandkids to help him collect his bait. He didn’t care about material things, just a good fishing pole and a way to get to his secret fishing spots. Gatherings starring Grandpa's fried catfish, homemade fries and of course fishing stories were very special. To grandkids, Grandpa will be most remembered for his talent in the kitchen. He could bake the most delicious bread and cinnamon rolls. Frank was a devoted husband and took care of his wife, Virginia Nell, during her illness. He stayed by her side for fourteen years until her passing on June 28, 2007. He was kind, fair and always there. He will be dearly missed. He always helped someone in need. He couldn’t stand for anything to go hungry, person or animal. May his heavenly home have the biggest fishing hole and hungry family members nearby.

The family of Mr. Frank Grabs created this Life Tributes page to make it easy to share your memories.

Send flowers to the Grabs family.