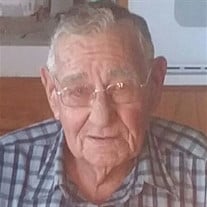 Emmett L. Rich, 86, of Cisco went to be with his Lord and Savior Saturday, August 20, 2016. Services will be held at Tuesday, August 23, 2016 at the Old Gospel Church in Cisco at 10:30 am. A visitation will be held Monday, August 22nd at Chambers Funeral Home. Emmett was born May 5, 1930 in Romney, Texas to Claude Lee Rich and Esther Anne (Lovell) Rich. He attended 1st grade at Romney School and Graduated Cisco High in 1949. Emmett was in the Army National guard from 1949 to 1962. He worked at AG Motor Company in Cisco’s Chevy Dealer as Parts Manager from 1949 to 1957; Graham Ford Parts Manager until 1961; Lone Star Gas Plant from 1961 to 1966; owner of Own Parts and Shop from 1966 to 2001. Emmett was a Farmer/Rancher his entire life up until his time of death and was an avid coffee drinker at popular donut shops and Shannon’s Burger Barn. He also served on Cisco’s Independent School Board and Trustees from 1976 to 1988, was on the Cisco EL Graham Hospital Board from 1988 to 1990; served on Eastland County Appraisal District from 1980 to 1994; was President of Romney Cemetery Association from 1980 to 2015; and was a member of Old Gospel Church in Cisco Texas from 1953 until his death. Emmett married the love of his life Martha Lee Ziehr May 31, 1953; they were married 60 years before her death June 1, 2013. Emmett is survived by daughter, Trecia Kay Rich Veach and husband Dwight of Wichita Falls, TX; son-in-law, Raymond Bates of Cisco; grandchildren, Richard Felty and girlfriend Torie Johnson of Wichita Falls, TX, Kallie Veach of Temple, OK, Craig Veach of Comanche, OK, Elizabeth Robertson and husband Bradley of Cisco, TX, Caren Vera of Brownwood, TX, Rev James Bates and wife Sylvia of Brownsville, TX; sisters, Kathleen Swindle of Cisco, TX and Geneva Reed and husband A.C. of Lubbock, TX; great grandchildren, Levi, Jack, and Ben Robertson of Cisco, TX; and numerous nieces and nephews. He is preceded in death by his parents, wife, sister, Mary Catherine Bates, and grandson, Stephen Ray Bates.

The family of Emmett L. Rich created this Life Tributes page to make it easy to share your memories.

Send flowers to the Rich family.