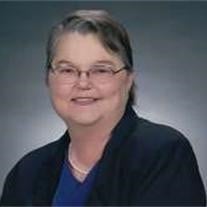 CISCO-Corliss "Gail" Lewis, 61, of Cisco passed away Wednesday, May 29, 2013. Services will be held at 11:00 AM Friday, May 31, 2013 at Chambers Funeral Home Chapel in Cisco, Texas. Visitation will be at the funeral home from 5:00 PM until 7:00 PM on Thursday, May 30, 2013. Services are under the direction of Chambers Funeral Home. Corliss "Gail" Lewis was born July 9, 1951 in Liberty, Texas to John Baker and Marceline "Dora" (Gilley) Lightfoot. She graduated from high school. On June 7, 1968, she married James Arthur "Hippie" Lewis in Odessa, Texas. She worked for Danny Herman Trucking as a co-truck driver with her husband. They moved to Cisco, Texas in 1998. "Hippie" preceded her in death in 2003. She was preceded in death by her parents, a sister: Bonnie Rakes, and a brother-in-law: Dale McFadin. "Gail" is survived by her sons: Brian T. Lewis and James L. Lewis of Cisco, sister: Yvonne McFadin-Hitt and husband Michael of Cisco, brother- in-law: Westley Rakes of Cisco, two grandsons, and extended family who all loved her. Memorials may be sent to the Cisco Food Pantry, PO Box 45, Cisco, Texas 76437.

The family of Corliss Lewis created this Life Tributes page to make it easy to share your memories.

Send flowers to the Lewis family.