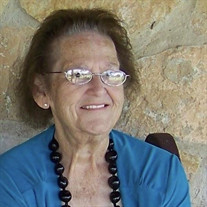 Carol Kenney Giddings, 72, went to be with the Lord Wednesday, April 24, 2019. Services will be held at Coleman City Cemetery, Monday, April 29th at 10:00 AM. Visitation will be Sunday, April 28th from 4pm to 6pm at Chambers funeral home. All local services are under the direction of Chambers Funeral Home in Cisco, Texas. Carol was born October 25, 1946 to Lola Mae Goodwin Kenney and Elvis Carol Kenney in Coleman, Texas. She was a graduate of Coleman High School and Central Texas Commercial College. She was born in Coleman and resided there until she married Eddie Copeland. They resided in California, Killeen TX and Coleman TX. They opened their hearts to a daughter Rosanna Mae in September of 1972. Later in life she moved to Cisco TX and married Wayne Giddings who preceded her in death in September of 2013. The last 6 months were spent staying with her daughter in Corpus Christi, TX. She loved God above all else, and most of us believed she had a personal phone number to him others didn’t have. Carol loved to tell everyone how she prayed for a grandchild that the doctors said was not to be, but she knew God was in control. On November 3, 1995 God blessed her with a grandson, Brandon Gossett. She bragged about him to everyone and loved him so very much. Carol is survived by daughter, Rosanna Copeland Gossett and husband Alan (Corpus Christi, TX); grandson Brandon Gossett (Corpus Christi, TX), two sisters Mary Walker (Sweetwater, TX) and Judy Pittman and husband Mike (Corpus Christi, TX), 2 brothers Richard Kenney and wife Vicki and Jackie Kenney and wife Norma (Coleman, TX). In lieu of flowers donations can be made to Texas State Aquarium, Corpus Christi, TX. Carol will be missed by her friends and family and her little dog Peppi.

Carol Kenney Giddings, 72, went to be with the Lord Wednesday, April 24, 2019. Services will be held at Coleman City Cemetery, Monday, April 29th at 10:00 AM. Visitation will be Sunday, April 28th from 4pm to 6pm at Chambers funeral home. All... View Obituary & Service Information

The family of Carol Kenney Giddings created this Life Tributes page to make it easy to share your memories.

Carol Kenney Giddings, 72, went to be with the Lord Wednesday,...

Send flowers to the Giddings family.