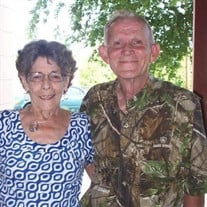 Bobby Joe Griffin, age 76, and Carolyn Sue Griffin, age 74, died April 10, 2015 at their home in Cisco, Texas. Married on July 10, 1958 in Plains, Texas, Bobby and Carolyn shared 57 years together. Bobby was born August 11, 1938 in Staff, Texas to James and Nellie Griffin. Carolyn was born January 29, 1941 in El Dorado, Arkansas to Roy and Susie Farmer. Bobby served in the United States Army, serving tours at Ft. Leavenworth, Kansas, and in Germany. Upon completing his Army service, Bobby worked as an electrician during the construction of the Glen Rose Nuclear facility, and then spent many years as a machinist at RE Dye manufacturing in Breckenridge, Texas. Bobby spent his final years before retiring from the work force as a maintenance technician at the Eastland Memorial Hospital. Carolyn was a mother, homemaker, and part time seamstress for many years in Breckenridge while their daughter Donna Kay attended school. In their final years, Bobby and Carolyn spent time working on their small ranch south of Eastland. Bobby enjoyed using his tractor to mow and plow, while Carolyn spent time fishing under the shade trees at the stock tank. Bobby remained an avid sportsman through his final days, enjoying hunting deer, turkey, and coyotes at the ranch. They both enjoyed gardening and making things grow, while building an oasis of peace under the oak trees for family to enjoy. Bobby is survived by his sister Eva Southerland, of Eastland, Texas, and brother Gaylon and sister-in-law Lori of Oxley, Arkansas. Bobby is preceded in death by his older brothers, Morris, Elmer, and Eudell. Carolyn is survived by her brother Lynn Roy Farmer of Breckenridge, Texas. The couple is also survived by their daughter and son-in-law Donna and Marc Hayworth of Round Rock, Texas. They have three grandchildren, Jessica Whitelaw and husband David of Austin, Texas, and Kendall and Kyleigh Hayworth of Round Rock, Texas. Visitation will be at Chambers Funeral Home in Cisco Thursday April 16th from 11:00 am – 1:00 pm, with internment to follow at Mitchell Cemetery west of Cisco at 2:00 pm. The family requests that live plants be sent in lieu of cut flowers, or consider making a donation to your local "Meals-On-Wheels" support for the elderly.

The family of Bobby & Carolyn Griffin created this Life Tributes page to make it easy to share your memories.

Send flowers to the Griffin family.